THE “WHAT IS MY CALLING QUIZ”

Several years ago, I was having the same conversation I’ve had countless times, this time with a young woman I was mentoring on my team.  She was trying to navigate where she fit best.  She is one of those talented people that can carry a variety of different roles with ease.  She felt torn between different parts of the church.  “Should I do youth ministry? Worship ministry? Missions? Women’s ministry?”  She felt like she needed to choose one area, or that she should know the specific thing God was calling her to do.  She felt a little lost.  After several hours of conversation, I can remember her looking at me with frustrated envy in her eyes.  “How are you so certain of what you are supposed to be doing?” she asked me.

Google is interesting for two reasons.  Not only does Google always know the answers to the very random questions I pose every few hours, but Google also knows what every one else is wondering.  When I enter the search string, “what is my calling,” Google suggest these similar search strings:

“what is my calling from God quiz”

“what is my true calling quiz”

“what is my calling quiz”

“what is my calling test”

“what is my calling in life”

I was a little startled by the idea that we are searching for an online quiz and its computer-generated answers to discover our calling.  The kinds of quizzes that float around Facebook tend to be fairly inconsequential.  I’m sucked in occasionally, but usually end of a little disgusted at myself for bothering.  The results are less than earth shattering.  Are we really so desperate for direction that we need a quiz to figure it out for us?  I guess we are.

Many people have written great stuff about how to figure out your calling.  Casey Treat wrote a great book called, Fulfilling Your God-Given   Destiny.  If we can find the sweet spot between what we are good at; what we are passionate about; what we have worked hard to master; and what smart people in our lives have identified as something we have potential in; then I think we will find something resembling a calling.

This article dives into this idea a little further if you have absolutely no idea what you are supposed to do with your life.

You may be saying, yes, Anna, I get all that.  But what does God want me to do?

WHERE DOES GOD SPEAK TO YOU?

There are things that I do that feel so right.  This is a hard idea to describe, but when I am doing them, I sense God in it. I think Jacob experienced something similar.  “Then God said to Jacob, “Go up to Bethel and settle there, and build an altar there to God.  Jacob called the place where God had talked with him Bethel.”  (Genesis 35:1, 15 NIV)

Jacob had this place, Bethel, where he knew he could go and would always hear from God. God speaks to us in certain places.  We feel a sense of rightness there that can’t be explained, except that they are our Bethel. Bethel literally means, “house of God.”  Our Bethel will always be in a local church.  As we connect ourselves to the community there, God speaks to us and puts his purpose in our hands.

God literally appeared to Jacob and spoke to him audibly, but that doesn’t happen to many people.  People frequently have a hard time hearing God speak to them personally.  Jesus is a master of subtlety.  To hear him, you have to be paying very close attention.  “For God does speak—now one way, now another—though no one perceives it.”  (Job 33:14 NIV)

God speaks to us in a variety of ways.  Sometimes God speaks through the wisdom of a trusted leader or pastor.  Sometimes he speaks through dreams.  Sometimes he speaks directly to the deepest part of our identity.  It’s the part of us that doesn’t use words; it just knows.  Some refer to that place as their “knower.”  We have this unexplainable certainty that compels us.  Most often he speaks to me through the Bible.  I’ll be reading along, and all of a sudden, a scripture lights up on the page.  In this deep inner place, a connection is made, and it’s like the lights have turned on around that scripture and how it applies to my life.

If we look for this prompting, we will find it.  It can’t be found through a sense of urgency or ambition.  It’s found in the quiet urgings of rightness.

Some people are afraid to discover God’s calling for their lives.  Years ago, Scott Wesley Brown wrote a funny song you may remember, “Please Don’t Send Me to Africa.”

Please don’t send me to Africa

I don’t think I’ve got what it takes

I’ll serve you here in suburbia

In my comfortable middle class life

But please don’t send me out into the bush

Where the natives are restless at night

This song, as silly as it is, exaggerates what many of us have worried about. It’s normal to worry a bit. If we let God into the driver’s seat, will he make us do things we really don’t want to do?  Will we be obligated to do boring things with boring people?

When we give our lives to Christ, we are set free.  We no longer have any obligations, no debts.  Freedom in Christ is real freedom.  It doesn’t mean that right and wrong go away.  It just changes our status.  We go from being slaves of sin to sons

I discovered the PBS series, Downton Abbey, last year some time.  It’s this fairly addicting show about British nobility during the turn of the century.  The show follows the lives of a wealthy Earl’s family and their servants.  There is a very firm line dividing the two classes of people.  The servants have very structured lives, and do whatever the family asks them to do.  The lord and ladies do pretty much whatever they feel like at any given time.

It’s a similar thing with Jesus.  When we receive Christ, we are adopted into his family.  Our family status has been elevated; we are now sons and daughters of God.  We have the privileges and the authority that sons and daughters have.  The closer we get to Jesus, the more freedom we have, not the less.  God is not an autocrat, dictating our every move.  God is a loving Father who empowers us to do great things for his house.

Moses had this kind of relationship with God.  God asked Moses to do certain things: “Then the Lord said to Moses, “Go to Pharaoh and say to him, ‘This is what the Lord says: Let my people go, so that they may worship me.’” Moses asked God to do certain things: “Moses cried out to the Lord about the frogs he had brought on Pharaoh. And the Lord did what Moses asked.”  (Exodus 8:1, 12-13 NIV)  It’s enough to make you wonder, who is in charge here? Moses received his mission from God, and then it became a partnership.  Sometimes God was doing the directing, and sometimes Moses was doing the directing.  Both God and Moses were working toward the same end: freedom for the Jewish people.

If we will pick up the mission that Jesus has given us, we have quite a bit of freedom in how that unfolds.  All we have to do is ask.

“Then Jesus said to them, “Suppose you have a friend, and you go to him at midnight and say, ‘Friend, lend me three loaves of bread; a friend of mine on a journey has come to me, and I have no food to offer him.’ And suppose the one inside answers, ‘Don’t bother me. The door is already locked, and my children and I are in bed. I can’t get up and give you anything.’ I tell you, even though he will not get up and give you the bread because of friendship, yet because of your shameless audacity he will surely get up and give you as much as you need. “So I say to you: Ask and it will be given to you; seek and you will find; knock and the door will be opened to you.  For everyone who asks receives; the one who seeks finds; and to the one who knocks, the door will be opened.” (Luke 11:5-10 NIV)

Do you have something that you want to do?  Try asking.  Apparently Jesus responds to shameless audacity!

It’s worth noting that the request that got answered was not self-focused.  This request was for help to be able to meet someone else’s need. As divine nobility, we have both great privilege and great responsibility.  Jesus’s Great Commission was all about reaching out to the world around us.  If our dreams have lots of “I want” in them, then maybe it’s time to broaden their scope a little.

DO WHAT YOU CAN RIGHT NOW WITH WHAT YOU HAVE

Some of us have some pretty definite ideas of what we want to do, but it seems so far off that it’s discouraging.  What then?  The sinful woman who anointed Jesus was in this state.

No one sets out in life to be known as “the sinful woman.” Her dreams had been long since trampled.  I’m sure no one was more disappointed than she was by her own behavior and the results.  There just wasn’t enough time to turn it around; she had lived a lifetime already.  She was trapped by her own reputation, and she had no one to blame but herself.

After some thought, she decided to give Jesus a moment, a memory.  She took an expensive jar of perfume, and crashed a dinner party.  She found Jesus at the table, and poured it on him there.  It must have been a dramatic moment; an unforgettable moment.  This is what Jesus said.  “She did what she could. She poured perfume on my body beforehand to prepare for my burial. Truly I tell you, wherever the gospel is preached throughout the world, what she has done will also be told, in memory of her.” (Mark 14: 8-9 NIV) 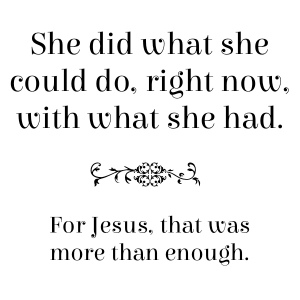 She did what she could do, right now, with what she had.  For Jesus, that was more than enough.  Our calling may have complicated dreams and future plans, but sometimes our calling is in a moment, in a single act.  What can I do right now, with what I have in my hand?  If we will just do that, we will gain the pleasure of our Father.  So often we over-complicate things when God is calling us to the simple, faithful acts of serving his people.  As we serve people, we serve Jesus.  Let’s not overlook the power and significance in these small moments.

* What can I do with the time, talent, ability, and resource I have right now?

* What gives me a yes in my spirit when I get involved?

* Am I waiting for God to open a door when God is on the other side, waiting for me to knock?